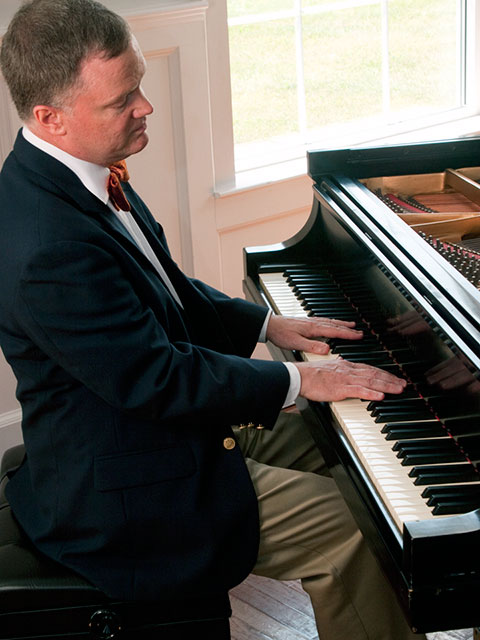 Malcolm Halliday performs in the United States, Europe and Mexico, both as a soloist and in collaboration with singers, instrumentalists and orchestra. A champion of more recent and contemporary music, Halliday can be heard as pianist on two recordings of the music of the American composer Leo Sowerby: a solo album entitled Impressions, and songs with bass-baritone Robert Osborne in a collaborative album entitled My Love Unspoken, both CDs released through Albany Records.

On numerous occasions, he has performed on historical pianos from the E. Michael Frederick Collection, using period instruments in concerts at Jordan Hall and Faneuil Hall in Boston, Mechanics Hall in Worcester, the Metropolitan Museum of Art in New York, and other locations throughout New England. With bass-baritone Robert Osborne, he recorded Schubert’s Winterreise using an original fortepiano, c. 1828 crafted by Viennese builder Conrad Graf. A former resident pianist for the American Schubert Institute in Boston, Malcolm Halliday was a co-founder of the Worcester Schubertiade, from which he retired in 2016. For many years he was pianist with mezzo-soprano D'Anna Fortunato and clarinetist Chester Brezniak in the Blackstone Trio. With tenor Stanley Wilson, he recorded music of English composers Bridge, Elgar, Quilter and Vaughan Williams, as well as Dichterliebe and Liederkreis by Robert Schumann.

Halliday received degrees in piano performance from Oberlin Conservatory (BA) and Boston University (MMus). His principal piano teachers include Paul Badura-Skoda, Henrica Bordwin, Miles Mauney, and Bela Nagy. He studied vocal accompanying with Allen Rogers, and received several fellowships in vocal coaching to the Tanglewood and Blossom Music Festivals. He has worked with many  organizations as a pianist, including the Opera Company of Boston, and the Handel and Haydn Society. He served many years as a member of the music faculty at Clark University, and also taught Worcester Polytechnic Institute, both institutions of higher learning in Worcester, MA.

An experienced concert presenter, Halliday was the Artistic Director of the Great Music Series in Provincetown, MA. More recently he was director of Arts on the Green, a concert series at the First Congregational Church of Shrewsbury, MA where he served as Minister of Music for 28 years.

“...Ravel’s ‘Gaspard de la Nuit’ was astonishing, not only for Halliday’s ease of technical command but for the air and light which were revealed in the work.”